When running low on money, people joke that it’s time to make your own. But it’s actually no joke. That’s exactly what happened for decades here in the city of Danville. In fact, during the mid to late 1800s, thousands of communities across America had their own currency.

Going Back in Time

Why did communities need to create their own currency? To answer that, let’s go back in time a bit further, to the nation’s beginning. To pay for the revolution, the Continental Congress printed America’s first paper money, called “continentals.” This was a mistake, however, as printing them in such large quantities led to inflation. People lost faith in the money and started using the saying, “not worth a continental” to mean “worthless.”

On and off for 45 years after 1791, the nation tried to set up a national bank. Each time, either Congress or the president would refuse to renew the bank’s charter once it expired. And that led to the situation in 1836, where states chartered banks, and some unchartered “free” banks sprang up as well. From 1836 until the Civil War, most currency was issued by local banks.

In Danville, the only local institution to do this was called, unsurprisingly, The Danville Bank. This was a private company, unaffiliated with or regulated by the local government. Its president was William T. Sutherlin, and the banknotes carried his signature.

Now fast forward a few years to the Civil War. Not surprisingly, residents across the country hoarded the few gold and silver coins they had. Even copper pennies were hard to come by. Because of this shortage, individual states and several local governments issued small denomination notes. And we do mean small. Danville, which had incorporated as a town in 1835, issued 25, 50, and 75 cent notes. 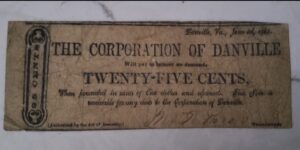 The drawback to this system was geography. The farther a person traveled from the place where these notes were issued, the less likely it was that they would be accepted at face value. Say a person wanted to get away from the war and head out to California. To do that, they crossed the border from Virginia into North Carolina, looking to buy supplies and a ticket. Even if they had heard of the bank that issued the notes, a $10 Danville Bank bill might only buy $5 worth of supplies, if it was accepted at all.

Why the concern? Bank failures were common during that time period, so even if one had a legitimate note from a real bank, there was no guarantee it was actually worth anything. And again, that’s if it was real. The country had a counterfeiting problem at the time, with some notes created for banks that didn’t exist.

To alleviate this problem (initially, just for northern banks) and to raise funds for the war effort, the federal government developed the national banking system in 1863. Under this system, a local bank could become a national bank by depositing a minimum of $50,000 with the Treasury Department. In exchange, the bank would receive an equal amount of national bank notes, all backed by the federal government. Although these notes were all similar in design, creating uniformity of the circulating currency, they did bear the name of the issuing bank and the name of the locality where that bank was located.

This system worked quite well and was quickly adopted by the southern banks after the war. In Danville, there were to be a total of five different national banks. The first, again unsurprisingly, was the First National Bank of Danville. It operated from 1865 until 1868. Although there are rumors to the contrary, no notes from this bank are officially known to still exist. 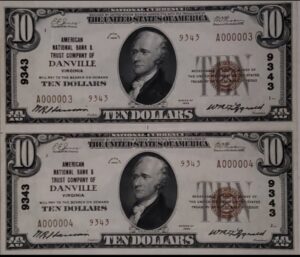 The national bank system finally came to an end in the 20th century. That happened due to banking reforms brought about by the Great Depression. Even so, the notes continued to circulate for some time after. In fact, they are still legal tender, although usually worth more than face value as collector items. 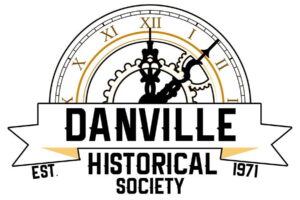 This story was put together by the Danville Historical Society. 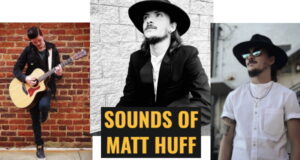 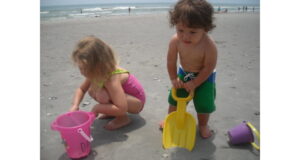 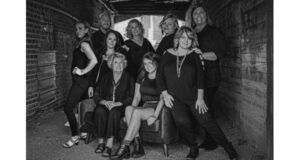 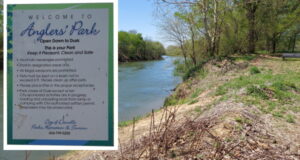 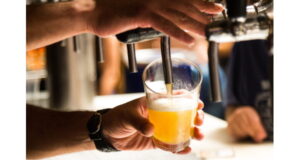 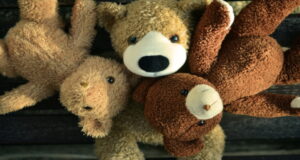 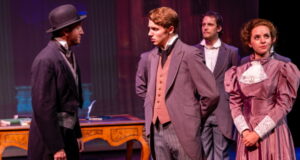 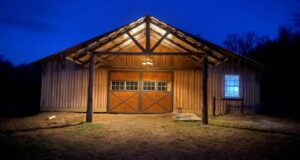 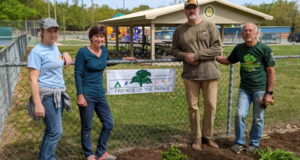 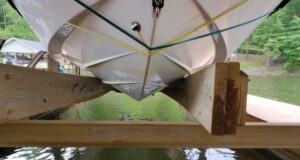